The World of Pyramid Solitaire

Pyramid Solitaire is one of the games provided in the world of solitaire. The game uses a single deck with either 48 or the standard 52 cards arranged to form a pyramid. To those who love playing with cards, there is no limit to the amount of fun you can have with computers that are linked to the internet. Playing pyramid solitaire is just a matter of opening a compatible browser and having a feel of the virtual playground that is availed to you. If you want to try out what is in store for you as you begin your experience in enjoying free pyramid solitaire online, check out the game above. In the meantime, here is an overview of what to expect.

Pyramid solitaire is a single-deck game that mostly uses a set of fifty-two cards. The cards are arranged to make a pyramid with twenty-one cards put in six overlapping rows, thus the name of the game. In the setup of the game, the cards are placed while facing up. Five rows of the pyramid have the cards placed such that each card is blocked with one or two other cards. Only the cards in the bottom-most row are left exposed, that is, there are no overlapping cards that are covering them. The stockpile, which comprises of the cards that are not placed on the pyramid, is placed alongside the pyramid to aid in the pairing of the cards before they are sent to the foundation pile.

The game comes to an end once all the cards in the pyramid are brought down, or if there are no possible combinations to bring down the cards from the pyramid or the stockpile.

The rule of determining the value of a card

solitaire uses the value of the cards to add and pair them up before they can be removed from the tableau. The rule of determining the value of the card is the same as that found in other games in the solitaire category. The King is assigned a value of thirteen, the Queen is twelve, Jack is eleven, and so forth. Aces come down to have a value of one. Cards are usually moved in pairs whose value add up to thirteen. To pair cards up, you can choose from the cards that are left exposed in the pyramid, or combine cards from the pyramid and those in the stockpile whose total value is thirteen. The King serves an exception since it has a sole value of thirteen, hence does not need to be paired up with any other card before it can be sent to the foundation pile.

Remove pyramid and stockpile to the foundation pile

The main aim of solitaire is to remove the cards from the pyramid and the stockpile to the foundation pile. This is achieved by picking two cards that have a combined value of thirteen and removing them from the tableau. Our gaming platform provides an easy click-to-play option that makes this easy for you as you progress in the game. You just have to click on the first card, then move the pointer to the next card. If the two cards fulfill the rule of the game, the cards are removed from play. It is important to note that only the topmost card in the stockpile and the exposed cards in the pyramid are eligible to be removed from play. Once these cards are sent to the foundation pile, you can check the availability and total value of the remaining cards to continue with the game.

Dial a card from the stockpile

The stockpile is used if there is no card-pair in the pyramid that can be selected. Unlike the cards in the pyramid, the stockpile has its cards placed while facing down. Dialing of the stockpile displays other cards in the pile that can be used. Only one card from this pile can be used in the gameplay at any instance. If you are not satisfied with the option that is given, one can choose to redial the pile until a favorable card comes along. However, this is not always the case. If no card-pair fulfills the requirements of the game, then you need to start a new game or undo your last moves.

Pyramid solitaire comes to an end if the tableau is cleared of cards. Alternatively, there can be no other card pair that is available for play, at which point the game also warrants an end. Points are awarded for each clearance that is done. Bonus points are also given at various stages of the games, based on the level and complexity of play.

In my experience of the game, some strategies deem useful for one to have a successful run while playing pyramid solitaire. The first obvious thing to do is to scan the cards in the pyramid for hints of impossible games to win. This will save you time, especially if you are someone who likes to choose the hardest levels in any game for a feel of a challenge.

Next, you should always be on the lookout for Kings that are either exposed or come up in the stockpile as they do not require a card-pair to clear them from the gameplay. Finally, you should try and even up the sides of the pyramid as you clear the cards from the bottom up. There is that tendency to pick on one side of the pyramid whilst in the spirit of the game only to find some favorable cards that are stacked so deep in the pyramid on the other side.

How do you set up pyramid solitaire?

Pyramid solitaire is set up by having a card placed while facing up. Two cards are placed beneath this card while overlapping it. Three cards are then placed below the two cards, again, overlapping them. This sequence is repeated down until the pyramid is built with 7 rows. 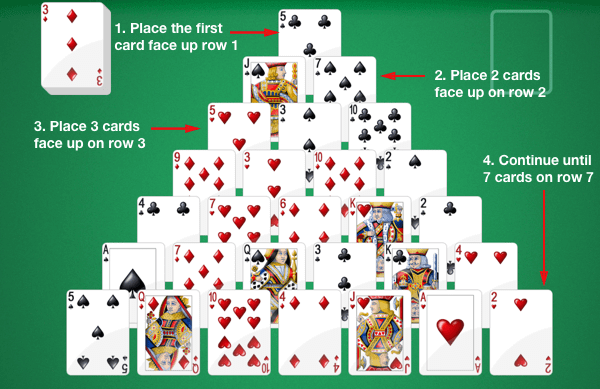 How do you play pyramid solitaire with cards?

Playing pyramid solitaire requires one to select a combination of two cards, either from the pyramid or the stockpile, with a value of 13 and sending them to the foundation pile.

How do you play the card game Solitaire?

Solitaire requires seven card piles that are dealt from the left to the right, with the bottom-most card in each pile dealt facing up while the other cards, if any, are facing down.

How many rows are there in Solitaire?

There are four foundation rows in solitaire for each of the card suit.

How many rows are there in Pyramid Solitaire

There are 7 rows in Pyramid Solitaire. The first row consists of one card and it is at the top of the Pyramid. The last row (7) is in the foundation of the Pyramid and has 7 cards in it. 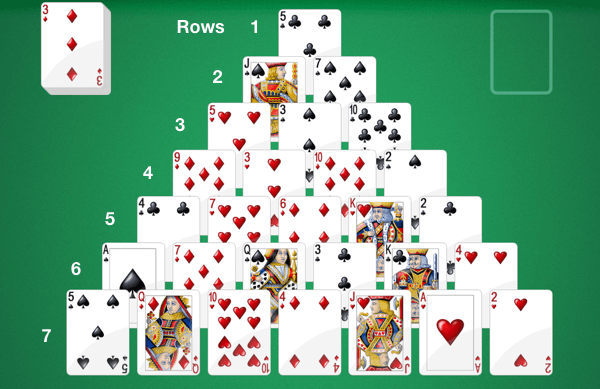 Pyramid solitaire is a part of our world of solitaire collection.